A licensed event. No minors permitted. Proof of COVID-19 vaccination required. See our FAQ for details. Check out the menu for this show.

This Event Is Sold Out!
Category: Don't Dress For Dinner Tags: dont dress for dinner, tickets
* Group discounts available for parties of five and over. 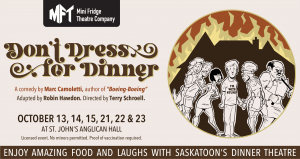 With a heavy heart, we at Mini Fridge Theatre Company have made the decision to postpone our dinner theatre production of “Hate Mail” slated to run Feb. 3, 4, 5, 10, 11, and 12.

Our full announcement is available on our home page.

Thank you, yet again, for your patience, compassion, and resilience during the pandemic.